Posted on October 4, 2011 by karensandler 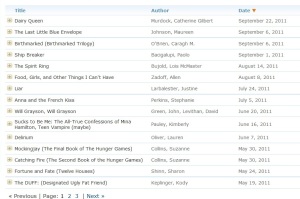 It’s really too early to list my favorite books for the year. But I have realized there’s one cool aspect to owning a Kindle. It keeps track of all the books in my library. And since I’ve only read a few non-e-books since I bought my Kindle, I can refer back to that list to review nearly every book I’ve read this year.

Ranking these books in any particular way, i.e., trying to figure out which was the best book I read, then the next best, etc., is an exercise in futility. I read eclectically and there’s no way to compare a 700-page autobiography to a fun, fast-paced YA. So I decided to come up with my own “award” categories for the books I’ve read in the last ten months. Here goes:

Most haunting book–Unwind by Neal Shusterman, both because of its thought-provoking story and the creepiest scene I’ve ever read in a book.

Book that really lived up to its hype–The Hunger Games by Suzanne Collins, because this book (in fact the series) did not disappoint.

Most moving, heartfelt book–A tie between Rules by Cynthia Lord and Mockingbird by Kathryn Erskine, because I felt a personal connection to the main characters.

Longest book that I just couldn’t put down–Autobiography of Mark Twain: The Complete and Authoritative Edition, Volume 1 which was fantastic, although I have to confess, I didn’t read all the footnotes (which comprise 40% of the book).

The hands-down most compelling first-person narrative–Room: A Novel by Emma Donoghue, which was another haunting book, but for an entirely different reason.

The most laugh-out-loud, yet still heart-warming, book–Will Grayson, Will Grayson by John Green and David Levithan because God-I-loved-this-book.

The book I probably recommended to more people than any other–The Help by Kathryn Stockett which made me see my own book, Tankborn, through new eyes.

The book I was most annoyed that I couldn’t read the sequel to right away—Matched by Ally Condie because, harrumph, I want to read Crossed now!

The funnest, most romantic books set in Europe–a tie between Anna and the French Kiss by Stephanie Perkins, and by Maureen Johnson, 13 Little Blue Envelopes and The Last Little Blue Envelope, because I wasn’t sure I’d like them, but they completely won me over.

The most mind-twisting book–Liar by Justine Larbalestier, because I never was quite sure what to believe, right up to the end.

There are more that I’ve read, but I’m going to leave it at this. How many of these have you read? Do you agree or disagree with my “awards?” Let me know.

Lover of chocolate. A couple felines short of full-fledged Cat Lady. Author of the YA Tankborn Trilogy (TANKBORN, AWAKENING, and REBELLION), from Tu Books. Founding team member of We Need Diverse Books. Opinions expressed here are my own.
View all posts by karensandler →
This entry was posted in Books and tagged anna and the french kiss, books, liar, little blue envelope, mark twain, matched, mockingbird, room, rules, TANKBORN, the help, the hunger games, uglies, unwind, will grayson will grayson. Bookmark the permalink.