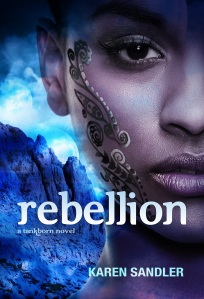 Here it is, the cover for the third and last book of the Tankborn trilogy! Isn’t it gorgeous? I am so in love with this book cover. It perfectly captures my heroine, Kayla 6982, and the very special setting of Rebellion‘s story.

In the wake of a devastating bomb blast, severely injured Kayla has been brought to the headquarters of the organization that planted the bomb—and many others like it in GEN food warehouses and homes. Her biological mother tells her that Devak is dead and that Kayla must join her in the terrorist group, which is ramping up for something big. Now Kayla must pretend that she embraces this new role in an underground compound full of paranoia as she plots a way to escape and save her friends.

Meanwhile, Devak has emerged from his healing in a gen-tank, only to be told that Kayla is dead and his family has fallen from grace. Can he overcome his grief at the loss of his power to see the clues that point to Kayla being alive?

As Kayla and Devak overcome the multiple obstacles put between them while trying to free GENs without further bloodshed, the Tankborn trilogy rushes to a thrilling conclusion!

These books have been a part of my life for nearly four years now, and it’s bittersweet to say goodbye to the series. But at the same time, it’s so exciting to have the trilogy completed.

So, how do you like the cover of Rebellion? I hope you love it as much as I do. 🙂

Author of young adult science fiction (Tankborn, Awakening, and Rebellion) and indie published romance and mystery. WGA writer working on a TV adaptation of the Tankborn Trilogy. All opinions expressed on my blog are my own.
View all posts by Karen Sandler →
This entry was posted in Books. Bookmark the permalink.